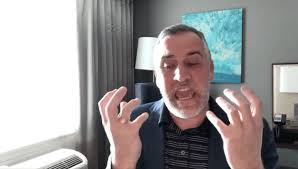 The professional anti-Calvinist, Leighton Flowers, has made it his life’s work to prop up the autonomy of man against the absolute sovereignty of the God “who worketh all things after the counsel of his own will” (Ephesians 1:11). But this is no easy task; the complete inability of man in the face of an all-powerful God is a theme that permeates the Scriptures, its truth erupting like a geyser wherever its magma gets too close to the surface. The resulting torrent of verses in clear defiance of the god-like freedom synergists ascribe to man has kept Leighton busy, driving him to address them one-by-one in the hopes that his whacking at the leaves will cause the tree to disappear. And so nearly every week now we’re met with another verse “DeCalvinized” – an admission we applaud him for, since he would not have to de-Calvinize them if they weren’t already Calvinist when left alone. This week, he grapples with 1 Corinthians 2:14:

But the natural man receiveth not the things of the Spirit of God: for they are foolishness unto him: neither can he know them, because they are spiritually discerned.

Let’s examine how he attempts to avoid this plain teaching, and then we’ll restore the integrity of this verse back to its organic, Calvinistic meaning.

The quality of Leighton’s counter-exegesis becomes apparent before he even presents it, because he won’t dare proffer it without first poisoning the well. He starts by implying that the average listener can’t even weigh the perspectives, insisting that “it is next to impossible to fully understand Paul’s intention in 1 Corinthians 1:18-2:16 without first having some understanding of the concept of ‘wisdom’ in the Greek culture.” But when we actually get into his arguments, nothing unique to “the Greek culture” is ever relevant to his case; his case merely relies on a distinction between divine wisdom and human wisdom. This distinction is understandable to anyone of any background – a fact that his own video testifies to, because he never feels it necessary to allude to cultural context again. So, why bring it up? It adds nothing to his presentation except allowing him to hide behind his credentials, so that – if you’re not convinced by his exegesis – you can be dismissed off-hand because you haven’t been to the universities that would have imparted you with the ability to evaluate what he’s saying anyways. This is what’s known as scholarly gnosticism, and unfortunately Leighton is far from the only one who engages in it.

Getting into the substance, he tells us it’s an assumption to say the verse is contrasting the natural man with the spiritual man, and that it’s really supposed to contrast those who prefer human wisdom with those who prefer divine wisdom. In other words, it’s an assumption to say the verse is contrasting the categories it says it’s contrasting ( just read the verse!), and we should pretend the Apostle is still using the categories he discussed earlier in the book, even though he isn’t here. By the time we reach verse 14, the Apostle had ended his polemic against man’s wisdom six verses ago (v. 8). Of course, those earlier sections are relevant to 1 Cor. 2:14, but they do not enable us to blindly import their categories into verse 14 as if he were just repeating himself in different terms, when there’s clearly been a shift in the argument. We will now do something that Leighton never did in his video: we’ll present a large portion of the second chapter, and instead of viewing each sentence as a lost fragment that can be pieced back together in any way we like (as those with autonomous free will are wont to do), we will actually examine the flow of the argument:

6 Howbeit we speak wisdom among them that are perfect: yet not the wisdom of this world, nor of the princes of this world, that come to nought:7 But we speak the wisdom of God in a mystery, even the hidden wisdom, which God ordained before the world unto our glory:8 Which none of the princes of this world knew: for had they known it, they would not have crucified the Lord of glory.9 But as it is written, Eye hath not seen, nor ear heard, neither have entered into the heart of man, the things which God hath prepared for them that love him.10 But God hath revealed them unto us by his Spirit: for the Spirit searcheth all things, yea, the deep things of God.11 For what man knoweth the things of a man, save the spirit of man which is in him? even so the things of God knoweth no man, but the Spirit of God.12 Now we have received, not the spirit of the world, but the spirit which is of God; that we might know the things that are freely given to us of God.13 Which things also we speak, not in the words which man’s wisdom teacheth, but which the Holy Ghost teacheth; comparing spiritual things with spiritual.14 But the natural man receiveth not the things of the Spirit of God: for they are foolishness unto him: neither can he know them, because they are spiritually discerned.15 But he that is spiritual judgeth all things, yet he himself is judged of no man.16 For who hath known the mind of the Lord, that he may instruct him? but we have the mind of Christ.

Mind those disjunctive conjunctions, especially in verses 9 and 10. In verse 9, the Apostle gives us the reason why men – even the wisest, most able, most powerful of men – were not able comprehend the glory of God in Christ; it’s because “Eye hath not seen, nor ear heard, neither have entered into the heart of man, the things which God hath prepared for them that love him.” The princes of verse 8 wouldn’t have crucified the Lord of Glory if they understood His majesty and the reward stored up for those who love and serve Him, but they couldn’t understand it. Why? Because – as Leighton would say – they could see both human and divine wisdom, but preferred human? No, Paul is clear that they couldn’t see or understand the divine wisdom at all. And not just them, as if only those esteemed to have great human wisdom were blind to the Truth; rather, Paul’s point is that even the wisest did not understand because no one could understand. The passage he quotes from Isaiah 64:4 is not confined to the worldly elite, but declares the universal ignorance of man regarding God’s purposes. His polemic against the wise is an argument a fortiori; his point is not that the wisdom of God is understandable to the dumb but not to the intelligent, but rather that even the most intelligent natural man can’t grasp it, and thus God has confounded human wisdom altogether.

Now note the second disjunctive conjunction at verse 10. Eye may have not seen before, but now we see! Is it because, although everyone had the capacity to see, we were the ones who preferred the divine wisdom? Talk about grounds for boasting (cf. Ephesians 2:9)! No, it’s only because “God hath revealed them to us by his Spirit,” and there was no wisdom in us – no extra “spiritual sensitivity” – that led us to see what others didn’t. God’s free mercy alone distinguishes us from the atheist. Man by himself cannot know the things of the Spirit, because “the things of God knoweth no man” (v. 11). Therefore, without the Spirit leading a man, he has no capacity to see the things of God. Remember, Paul’s intention here is to distinguish the believer who receives the things of God from those mentioned earlier, who didn’t receive and couldn’t even see the things of God. What they cannot see they certainly cannot respond to, so the folly of the synergist who supposes all men are able to respond is expressly denied here. If what distinguishes us is the ability to see at all – which is what Paul implies here – than the theories of “prevenient grace” cannot survive. It is only he that is made spiritual who can respond (v. 15), the natural man never will. Leighton’s own theory that the Word of God is what enables all men to respond or resist after hearing it is likewise cast down by these verses, because Paul tells us that the Spirit of God is that which enables us to receive the things of the Spirit (verses 12 and 14). If that which enables us to receive the things of the Spirit are the things of Spirit – i.e. the Word of God – then the plain distinction Paul makes between the activity of the Spirit that enables us to receive and the things that we receive is destroyed, and those verses become incoherent. Paul establishes that the enabling occurs before the receiving, which would not be true in Leighton’s system, who makes them out to be one thing.

A large part – perhaps the greater portion – of Leighton’s video does not so much deal with the text, but with the philosophical implications that result from its proper interpretation. This seems to be decisive for him as he weighs the perspectives. For Leighton, we should not accept the Calvinistic meaning so much because the text doesn’t teach it, but because the text cannot teach it. Otherwise, how could we get God off the hook for bearing the blame of His creatures’ rejection of Him! This shouldn’t be a concern for believers in the first place; God is the standard of justice, and there is no standard above Him that could judge Him for acting rightly or wrongly. All that He does is good by virtue of the fact that He does it, and His rectitude does not depend on the ability of His creatures to understand it. Even so, we will briefly respond to Flowers’ objection because it is honestly a poor one, and easy to answer: God is just in judging His creatures’ rejection of Him because they indeed chose to reject Him. “But they were predestined to do so,” the Arminian protests, “it’s not their fault!” Well, where is the innocent party in the creature? What part of the creature is not at fault? The hidden assumption of the Arminian’s protest is that there is a pre-existing, neutral and innocent part of the creature that didn’t choose to be the way it did, and then had its traits imposed on it. The natural man is so persuaded of his god-like autonomy that he cannot imagine being destined to behave a certain way unless he was forced to against his will, when in actuality he IS that will that rejects God and nothing more! There is no innocent part of you that doesn’t choose when you choose, you are the thing that chooses and God is right to judge you! Most people don’t have any problem when they hear of the judgement of the devil or the demons, because they rightly understand that they’re evil, and whether or not they were created does not change the fact that they themselves are evil and worthy of judgement. But when you stand to be judged, oh how things change! All of a sudden philosophy gets dragged in, with discussions of the will vs. the meta-will and all other sorts of nonsense. Reader, if you reject the free gift of Christ Jesus for the full forgiveness of sins, you will be condemned, and in that day all your philosophical objections – should you dare present them before the Throne – will be destroyed before your eyes. All Glory and Honor be to our great Redeemer, who not only saved us, but alone produced the desire in us to be saved!